It’s Earth Day, a time when thousands of people who regularly eat at McDonalds, drive SUVs and spray chemicals on their lawns take a moment to reflect on the miraculous planet on which we all depend. 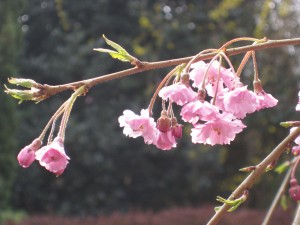 And then the moment passes, and we go back to our spendthrift ways, shopping for stuff we don’t need, and eventually tossing most of it into landfills buried like ugly secrets in every part of this beautiful nation.

Such a short-sighted species we are.

But, on this day, I choose to be optimistic, in part because I’ve brought children into this world, and I have to hope that we’re going to be able to keep it going for them, and all the children on the planet.

One bright shining change I see, from the ways things were almost forty years ago at the first Earth Day, is that awareness is finally growing faster. Back then, I witnessed the first Earth Day celebration at a concert in the shadow of the Washington Monument attended by only a few hundred rag-tag hippies and a small core of a new group of specialists called environmentalists. The word ecology was new to most people. The concept of recycling was widely disdained as ineffectual. We took diversity for granted.

Now we seem to know better. The world has changed, is changing still, and I believe there’s reason to hope that the planet, at least, will survive. Whether humans do remains to be seen. But, if they do, I think gardeners will play a big role in the realignment process of the skewed perspective that has gotten us into this mess.

Gardeners, like farmers, know that you can’t really fool Mother Nature. You might manage a joke now and then, but ultimately, unless we respect the fundamental balance of nature, and how interdependent we are with other life forms, we stand in real danger of poisoning the roots of the tree in which our human nest is delicately balanced.

In 1970 pockets of passionate gardeners recognized the danger of destroying diversity in the lust for corporate profit. Now, millions of dedicated gardeners and visionary citizens around the world are working together to protect the environment and to encourage more people to understand the vital links between all growing things.

The internet has facilitated this process, connecting gardeners worldwide through a vigorous network of sites dedicated to the idea that, as one of my favorite sites, GardenRant.com, puts it in their manifesto: gardening matters.

I used to get a certain amount of grief from various people about my compulsive gardening, my oohing and aahing over plants, as if I had some sort of mental problem. Well, I can’t deny that I may have some issues with detachment. But, I stand by my conviction that gardeners are needed, more gardens are always welcome, and there can never be too many flowers.